This story is the first in a series of fun-loving memories involving the life and antics of our beloved Junior.

On June 18, 2002, Magnolia Rose and Buford Beaureguard Didley welcomed their second litter of basset hound puppies. At 10 weeks, four of the six had gone to live with new families. The last two would have as well if it were not for the owners leaving town unexpectedly. Their extended sabbatical, however, did not stop the puppies from growing. In fact, they doubled in size and at four months, they were considered too old for many prospective families. No longer in high demand, the owners placed a classified ad, describing the puppies as ‘discounted’ purebreds.

My husband, Eddy, grew up during the Smokey and the Bandit era, and like every other 70’s kid, he fell in love with one of the movie’s co-stars: Fred the Basset Hound. Fred was slobbery, fat, stubborn, and had long ears and short legs. What was not to love? As a young boy, Eddy had two basset hounds: Thermador and Buford. They were perfect for kids, he informed me as he scanned the classifieds in search of one for our daughter’s birthday. 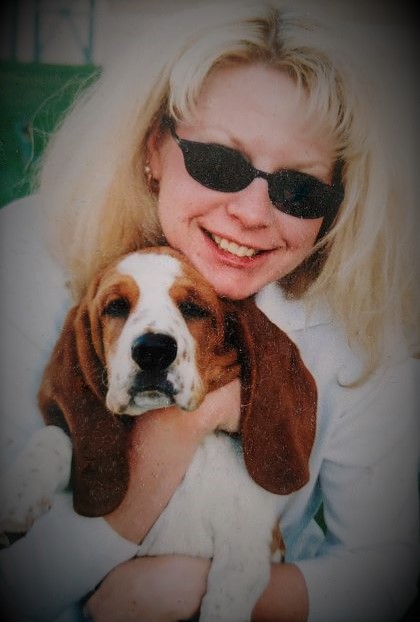 There were a couple of purebred hounds listed, but their price tags were over $700 – well beyond the perimeters of our military paycheck. Just when he was about to give up the search, Eddy came across the ad for ‘discounted’ bassets. They were only $300, but were located in Brigham City, 45-minutes away from our home. There was no guarantee the puppies would be there when we arrived. Nevertheless, we took the chance.

Both puppies were insanely adorable. They had fat pot bellies, rows of excess skin, droopy faces, long velvety ears, and short, stubby legs. I had never seen anything so cute in all my life. Their comical appearance was complimented by their goofy personalities. We watched the pair chase each other for a few seconds then abruptly plop down in overexaggerated exhaustion. One of the puppies rested quietly while the other rolled onto his back and began wiggling and growling incessantly. He put on quite the show. He made us laugh.

The puppies already had names, though neither responded when addressed. The quiet, reserved one was named Sam and the obnoxious one was named Eddy. The fact he shared my husband’s name was ironic yet confirming. Eddy won us over with his silly shenanigans. He was perfect for us. Since we already had an ‘Eddy’ in the family, we decided to call him Junior.

Junior the Basset Hound became a member of our family in October 2002. For 13 years, he whined constantly, refused to learn tricks or return a thrown ball, and “punished” us when we left him alone too long. He and I got off on the wrong foot. He treated our daughter like dirt. He loved rough-housing with his daddy. He was a master manipulator when it came to snacks. Our lives and decision-making centered around him. He controlled our hearts. We loved him dearly.

I love sharing memories of Junior and I suspect you enjoy sharing funny stories of your pets too. Jump on over the MemoryBlogger Forum and tell us about your favorite furry friend.

6 thoughts on “Junior the Basset Hound”